One of the hardest things when you start breeding bettas is developing your eye. In time, after staring at Bettas every day, you will get an idea of form. The next step is taking the ideals of balance, long straight rays, sharp edges and broad dorsal bases to your growing Juvies and making decisions on them. When you start you often will hold on to fish because you figure you never know. And with some lines you will have to wait it out a bit as they are slow to mature. Some lines bust out with big fins early and others, like the bunch I am going to show you, develop thick sturdy bodies and look like a tank of females. Slowly, as the body matures, the fins start to come on. Now I am familiar with this line so have an idea where these fish are going to mature, but they still have forms points you can use to evaluate your own fish for. 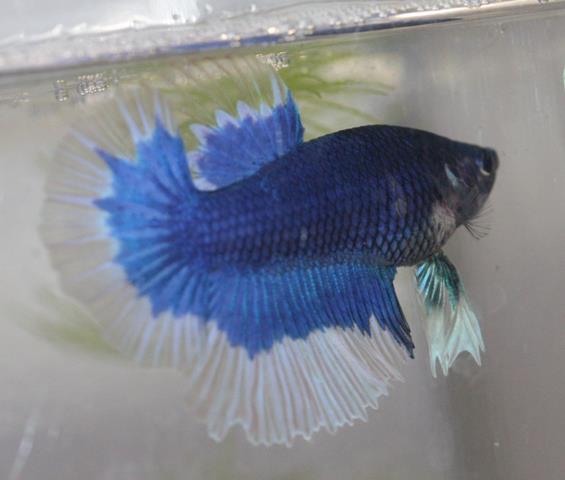 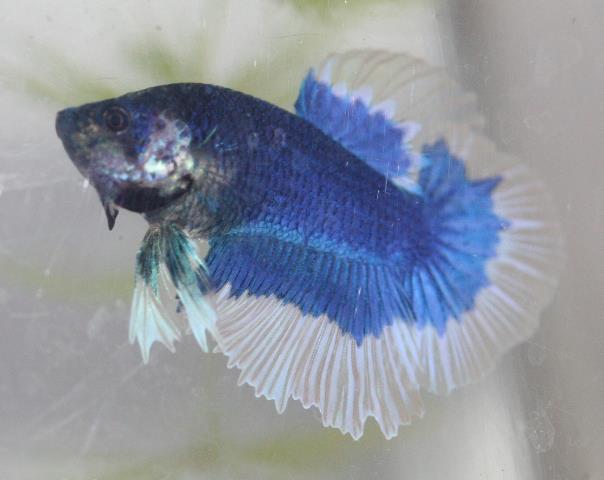 Here we have two photos of a colorful male. Since he is patterned like a Butterfly I am going to look hard at his coloring and how competitive he may be in a show. He will be evaluated on color before his form, so time to pick him apart.

Does this mean he is not competitive at a show? That is actually going to depend on what is there as competition against him. His color is not perfect, but if there is nothing better, he may gather me a few points, something to consider if you are chasing a year end award.

Now lets look at the form. From both angles you can see his anal is longer than that bottom tail ray. So his balance is not what I prefer or consider ideal. The first photo shows some unevenness in the tail edge and I would like to have it a bigger “D” shape. What I expect from this tail is for it to continue to branch and end up very well branched.. but it will probably never get in proportion to the rest of the fins. He will not have the balance I want so he will never be considered a breeder. Even if that pattern was perfect, the best he will be for me is a show fish. And so we will wait a bit and see how his fins develop and then decide if he will be shown. 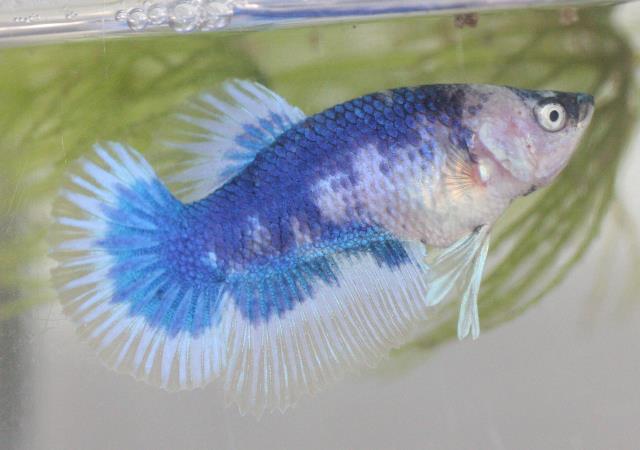 Here we a nice little marble. Again we have a patterned fish and that is the first consideration in the show. So lets pick apart his color. For a good marble we once again need a 50/50 split in the colors. Body is pretty close, a bit more blue on this side. But we also need to see that in the fins as well. Looking at the fins we actually see a pretty decent BF pattern. If it stays nice he may be better shown as a marble butterfly. There is a good division of color in the fins, but depending on the judge, may not be variegated enough. He is marbled nice enough to be worth showing as again, it will depend on what is showing against him on show day.

Now to the form. He is recently removed from the grow out and has not got the spread to 180 yet. But it looks to be coming. Top outside tail ray is a bit short, so gives a little rounded edge. It is not enough to end a show career if everything else is good. 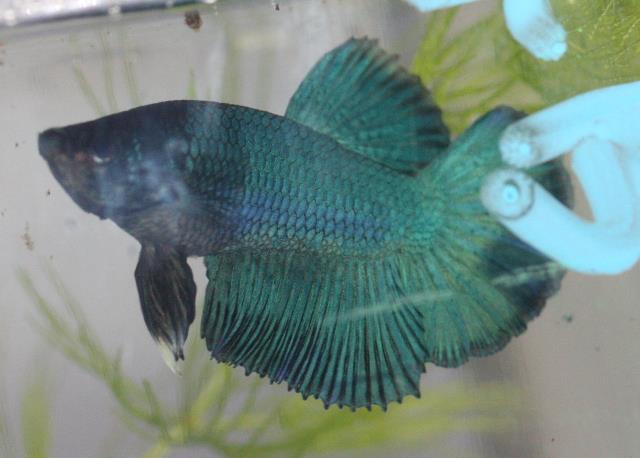 I do not have a good photo of this fish, and he is in a plastic container with rounded corners. So not the best to evaluate this fish, but we can see much of what we are interested in.

First thing that will catch most peoples eye is his metallic green color. He is supposed to be a solid so we need to look for any other color outside of green. He has some white tips on the ventrals, that against a comparable fish without it, would knock him down a placing. He has pretty good coverage of color and no red wash. So definitely a contender for the show ring.

Look at that top outside ray on the tail. It is long and straight. And the bottom, that can not be seen is also long and straight. When flared this fish has what we call sharp edges. There is also some good branching already going on, a plus if we want to breed him. The tail comes around into an anal that although is level, is also a bit long. I expect the tail to come on a bit and make up some of that, but he will still have a bit of lenth that will be less than ideal.

The dorsal has the first ray nice and long and there is some width to the base of the dorsal. Even at this angle you can see it is already branching well and is full when this fish is flared. Over all a nice fish and will be brought along for the shows. With his clean green coloring, branching and those sharp edges,  he may well be considered for breeding. 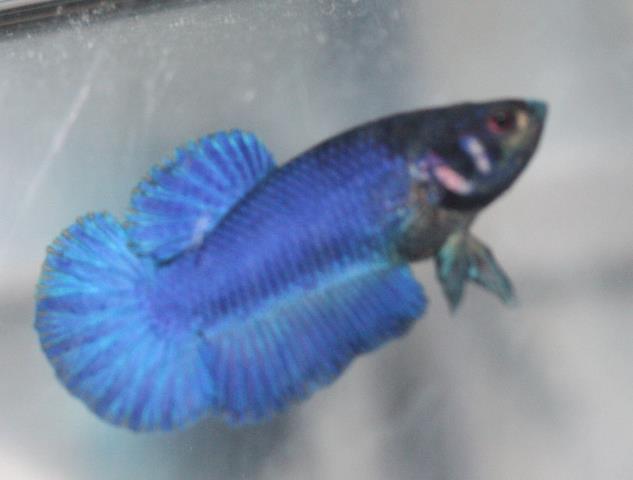 I know you are thinking we are now going to evaluate a female.. but remember I told you this line grows the body then the fihs? Well this is a young male recently pulled and in time he will be a very nice boy. Not the best photo as this guy was streaking around his container all full of himself, showing off to the girl next door.

Since he is a solid  lets take a closer look at his color. This male is a Royal blue, so we want to see nothing but blue on this fish. Places to look are tips of ventrals and red wash. From this photo there seems to be a hint of red wash in the ventral fins, but it could be lighting or just a slight wash. I’m also not seeing any black or white edging on the fins, he is blue edge to edge. He actually has pretty nice color that would allow him to do well in a show, so a show career may be before him.

The tail is the first thing most look at and his is already 180 in spread and well branched. You can even see there is more branching coming. Now we check the outside rays and they are long, giving the tail a nice “D” shape.

The dorsal has a wide base and is branching on almost all rays. As this fish matures I expect him to have a big, dorsal with a lot of volume. The dorsal comes up and the top flows nicely, right into the tail. I do not like to see one or the other fin higher than the other, even at this young age.

This boy, if he continues to stay in proportion, will be a very nice fish to send to the shows. And if he matures like I think he will he will probably be used for breeding. Good overall balance, even at this age, is the main thing I look for.

When I evaluate females in a spawn, I expect them to have a silhouette very similar to this for fish for sending to shows or breeding. I look for good branching, the balance I see in this male now and I am pretty hard on the color. I also like good long length as we see many bettas with sorter bodies these days.

You will find that much of what you see trending at this Juvie stage, will continue into maturity. A tail noticeably short in proportion to the other two fins will pretty much stay that way, and tends to look worse as time goes by. Anals that have a slope will also not level out as the fish matures. Learning your lines and what to look for early will allow you to pass on fish with the less desirable traits to friends and family so you can use your resources to grow the best of the bunch to their fullest potential.