Hole-in-the-head disease is most commonly seen in Discus and cichlids. However, the condition can affect any fish species, including bettas.

Betta hole-in-the-head disease is an extremely serious condition that will kill your betta buddy if you don’t recognize and treat the condition promptly and correctly.

This guide tells you everything you need to know about diagnosing, treating, and preventing hole-in-the-head disease in your betta.

What Is Betta Hole-In-The-Head Disease?

The disease is contagious and infectious.

There are several reasons why your betta fish might contract a hole-in-the-head disease.

Hole-in-the-head disease is usually caused by a microscopic, disease-causing parasite called Hexamita, which is also sometimes referred to as Spironucleus and Octomitus.

Hexamita lives in the fish’s intestinal tract. Usually, the parasite is pretty benign and has no adverse effect on the host. However, if the betta is weakened or sick, the parasite can spread throughout the fish’s other vital organs.

In the final stages of the infection, the pores on the betta’s head become infected and filled will pus. The pus-filled pores eventually rupture, leaving your poor betta buddy literally with holes in their head.

Bettas are primarily carnivorous fish that need plenty of meaty protein in their diet to remain healthy and thriving. Ideally, you should feed your betta a varied diet of commercially prepared mini betta pellets and frozen foods, such as bloodworms, mosquito larvae, daphnia, brine shrimp, and the like.

If the betta doesn’t receive a balanced, nutritious diet, it can suffer from vitamin deficiency, specifically vitamins A and C.

A lack of the necessary vitamin requirements in your betta’s diet can leave it weak and unable to fight off common fish diseases and parasites, including Hexamita.

Bettas are quite sensitive to poor water conditions, so regular maintenance is essential to keep the environment safe for your fish.

If the water is dirty and poorly oxygenated, your betta fish will become stressed. Stress compromises the betta’s immune system, making it much easier for the Hexamita parasite to attack your pet.

Bettas need stable water conditions to thrive and survive. If the water temperature and pH level vary, your betta will become highly stressed, and that could allow Hexamita to attack your pet.

The ideal water parameters for betta fish are:

Use an aquarium water testing kit to monitor the water conditions in your betta’s tank and make any necessary adjustments.

Stress in betta fish increases the chances of your pet contracting hole-in-the-head disease.

Stress can be caused by a number of factors, including:

Sometimes, if the betta has spent a long time in transit from the breeder to the pet store, it will be pretty stressed out when you buy it, and the journey home can tip your betta over the edge.

How To Recognize Hole-In-The-Head Disease In Bettas 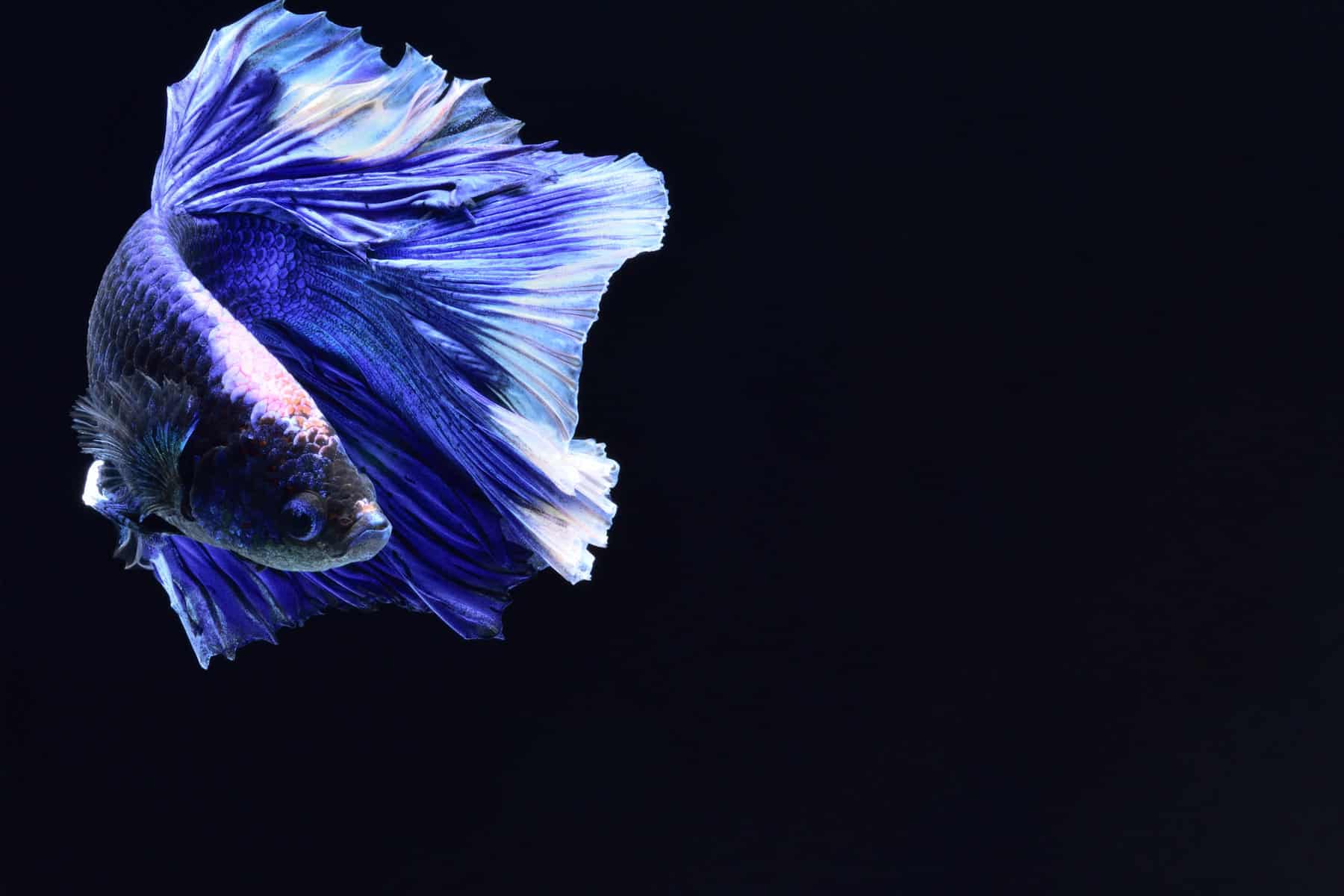 As previously mentioned, the sooner you know that your betta buddy has contracted hole-in-the-head disease, the quicker you can start treating the condition.

But unfortunately, many bettas die because their owners failed to spot the early warning signs of the disease. And once your pet develops pustular lesions on its head, it’s usually already too late to save it.

If you notice any of the following common signs, trouble is brewing, and you need to take steps to help your sick fish:

Feces with a white, stringy appearance is one of the main early symptoms of hole-in-the-head disease since it indicates problems within the betta fish’s intestinal tract.

In an effort to fight off the parasite, the betta’s gut produces more mucus, and that produces white, stringy feces.

One of the main reasons for the betta fish’s popularity as pets is their brilliant, dazzling coloring. A sick betta’s colors will fade noticeably from its original appearance.

That said, there are a few reasons why your betta might lose its vibrancy, including:

Before diagnosing your betta fish with hole-in-the-head disease, you should check the water conditions in its tank to ensure they are correct and stable.

Your fish’s color loss could simply be caused by its reaction to unsuitable water conditions in its aquarium, and a thorough tank cleaning and freshen-up could solve the problem.

Loss of Appetite and Weight Loss

Since hole-in-the-head disease begins in the fish’s gut, one of the first indications that there’s something wrong with your betta is a loss of appetite.

Bettas are usually good eaters, and if your pet suddenly starts rejecting its favorite foods, that’s a sure sign of trouble. However, a lack of appetite can also be caused by other conditions, including dropsy, swim bladder disease, and constipation.

You might also notice that your pet loses weight and becomes emaciated.

Holes in the Body and Head

In the final stages of the disease, your betta will probably develop deep holes in its head and in its body.

Once hole-in-the-head disease reaches that stage, there’s sadly little hope of a positive outcome for your fish.

How Can I Treat Hole-In-The-Head Disease?

You can treat betta hole-in-the-head disease with parasite medications if you catch the disease in its very early stages.

The preferred drug for treating hole-in-the-head disease in betta fish is called dimetridazole. Alternatively, you can use another medication called metronidazole.

In the US, both these medications can be purchased over the counter from your local pet or fish store. However, if you live elsewhere in the world, you might need to obtain the drug via a prescription from your vet.

Before treating your fish with either medication, you must double-check the medicine dosage levels with the manufacturer or your vet. Never guess or overdose your betta with medicine. You could do more harm than good.

There are two ways of administering the drug to your betta buddy:

Whichever method of dosing you choose, we recommend that you move your betta fish to a quarantine tank as soon as you notice any symptoms of hole-in-the-head disease.

Fish medication can affect everything living in your betta’s tank, including invertebrates, fish, plants, and the beneficial bacteria in your filtration system. Some fish medications contain copper that will kill inverts, such as shrimp and snails. For that reason, you should always treat your betta in a separate quarantine tank.

Like all betta diseases, prevention is much better than cure!

Here are the most effective ways of keeping your betta pet healthy and free from any form of disease, including hole-in-the-head.

As we discussed earlier in this article, your betta fish must get sufficient vitamins to remain healthy. As long as you feed your betta a balanced, high-quality, healthy diet, your pet should get everything it needs.

The best source of meaty protein is frozen food, such as daphnia, bloodworms, brine shrimp, and the like. Bettas enjoy live food. However, live food often comes with an unwanted cargo of parasites and bacteria that could introduce diseases into your tank.

So, unless you run a home brine shrimp hatchery or have a reliable source of live food, we recommend you don’t use it.

If you’re concerned that your betta is suffering from vitamin deficiency, you could consider adding water-soluble vitamins to its tank.

Your betta tank should have an efficient filtration system running 24/7, 365 days a year to keep the water clean and healthy for your pet.

You need to carry out weekly partial water changes of around 20% to 25% to refresh the water in your betta’s tank. Use an aquarium vacuum cleaner to remove organic waste from deep within the substrate and around decorations and plant bases.

Although betta fish are pretty solitary creatures in the wild environment, they do appreciate some company in captivity.

As you know, you can’t keep two male bettas together or these aggressive fish will fight. However, you can add a few peaceful tank mates to provide your betta with some company and interest in its environment.

But you mustn’t overstock your tank. If you have too many fish and other creatures in your betta tank, your fish will become stressed, which will lead to outbreaks of disease, including hole-in-the-head disease.

Will My Betta Recover From Hole-In-The-Head Disease?

If you recognize the symptoms of hole-in-the-head disease and begin treatment of the disease immediately, there’s a chance you could save your pet.

However, secondary infections can complicate your betta’s recovery, and if you don’t realize there’s a problem until the fish develops holes in its head and body, it’s probably too late for treatment to be effective.

Since the hole-in-the-head disease is highly contagious, you should quarantine your pet as soon as you spot that there’s a problem.

In this part of our guide, we answer a few questions that betta owners frequently ask about hole-in-the-head disease.

Q: How Do You Treat a Head Hole?

A: Hole-in-the-head disease can be treated with certain medications, provided you spot this common disease quickly and begin treatment right away.

The drugs of choice for treating hole-in-the-head disease are dimetridazole and metronidazole. Both these medicines are available over the counter in the US or on prescription from your vet.

Since the hole-in-the-head disease is contagious, we recommend that you move your betta to a separate tank and follow proper quarantine protocols until the treatment is complete.

A: If you spot the symptoms of hole-in-the-head disease early, there’s a good chance that you can keep your betta fish alive.

However, once the disease reaches its late stages, the prognosis is bleak, and the chances of fatality in your betta fish increase.

A: The primary cause of hole-in-the-head disease in fish is a parasite called Hexamita. The parasite lives in the intestines of bettas, where it doesn’t usually cause a problem until the fish is weakened by stress or disease.

In sick fish, the parasite spreads throughout the vital organs, eventually reaching the skin. The skin develops severe lesions filled with pus, typically on the fish’s head and body, which is what gives the parasitic infection its common name, hole-in-the-head disease.

Did you enjoy our guide to hole-in-the-head disease in tropical freshwater fish? If you did, please take a moment to share the article with other betta fans.

Hole-in-the-head disease in betta fish is caused by a type of parasite called Hexamita. The parasite lives in your betta’s intestines, typically only causing problems in stressed fish.

You can take steps to prevent the condition from attacking your betta fish by keeping the environment clean, maintaining the correct, stable water conditions, and feeding your betta a high-quality, balanced diet.

Did your betta buddy get the hole-in-the-head fish disease? Did it survive? Tell us how you saved your betta fish in the comments box below.