Many people think that male bettas are so aggressive that they must live a solitary life. Well, that’s not always the case. Bettas are intelligent, curious fish, and they do become bored if their environment lacks sufficient interest and stimulation. A bored betta is often a stressed, unhealthy fish. But do bettas appreciate company?

Well, the good news for your fishy friend is that there are many peaceful fishes that can make good tankmates for a lonely betta. In this guide, we take a look at the relationship between the beautiful Harlequin rasbora and the betta fish to see if it’s a marriage made in heaven or the road to Hell!

Betta fish come in many forms and color morphs, and your betta should be the star of the show in your tank. In fact, a betta’s aggression and belligerent behavior can be triggered by the sight of a brightly colored, flashy interloper in his tank.

So, is a school of Harlequin rasboras likely to upset your betta buddy?

The Harlequin rasbora is a pretty little fish that grows to reach a total length of around two inches, making it smaller than a fully grown betta fish. The fish’s appearance varies, depending on where it originates. For example, specimens found in Thailand are usually smaller and slimmer than fish from the Sunda Islands and Singapore. It’s thought that is because captive-bred have escaped or been released into the wild environment, polluting the natural gene pool.

Harlequins vary in color and can be a bright red, pale pink, or copper-orange color along the top and bottom of their bodies with a black or dark blue triangular marking on the back portion of the fish. You can also find varieties that are more golden or copper colors and some that have a mostly black body or a very strong blue tint.

Crucially, as far as your betta is concerned, the rasbora does not have a flowing tail that could otherwise provoke an attack.

Both bettas and rasboras enjoy an average lifespan of about five years in a well-maintained aquarium.

One of the most important aspects of compatibility for any fish species is each party’s preferred water conditions.

In the case of betta fish and rasboras, that’s not a problem, as both species do share the same wild habitat. That means that both fish species enjoy the same water parameters, including pH and temperature. Not only that, but they may also eat similar kinds of foods.

So, you’ll find rasboras and bettas living in the rice paddies, ditches, river basins, marshes, and other slow-moving bodies of water in South East Asia. That means that, so long as you provide a stable environment with the betta’s preferred water conditions in your fish tank, your pet’s rasbora friends should be happy too.

Are Harlequin rasboras suitable for beginners?

Although the Harlequin rasbora is a hardy species that can adapt to most tank conditions, they do prefer soft, slightly acidic water. Also, you will need to maintain the tank properly, and the water must be well-filtered. For that reason, we suggest that these fish are best suited to someone with a little fish keeping experience.

Betta fish are primarily carnivorous, although they will eat a small amount of plant and vegetable matter.

Harlequin rasboras are omnivorous. In nature, these active little fishes feed on worms, zooplankton, small insects, and crustaceans. In captivity, these fish enjoy a varied diet of high-quality tropical flakes, pellet food, and an occasional treat of bloodworms or brine shrimp. You can also offer some blanched spinach or lettuce.

Feed your fish twice a day, offering just enough food to last for a few minutes. Bettas are surface feeders, whereas rasboras will eat food from the surface, but they will also pick up particles of food that escape the betta’s attention and drift down through the water column. So, competition for food should not be a problem in a shared tank. 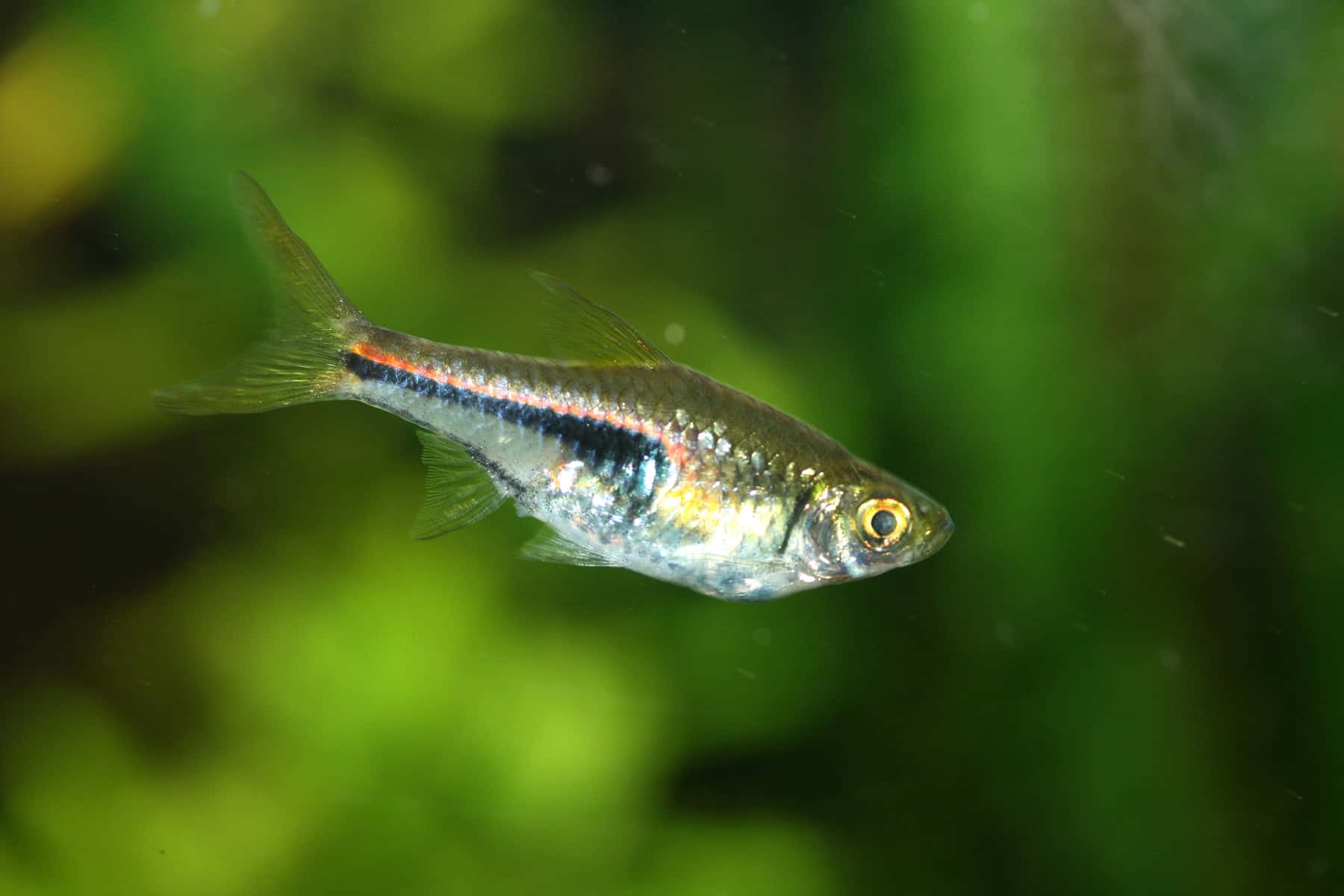 So, we know that bettas and rasboras come from almost identical natural habitats, but how about tank conditions?

Unlike the solitary betta fish, Harlequin rasboras are a schooling species that are happiest when kept in a group of up to ten individuals. So, if you keep your betta in a small tank, that environment won’t suit the Harlequin rasbora. Ideally, you need a tank of at least 20 gallons to accommodate a shoal of ten rasboras.

But betta fish are territorial, so you want to allow more space than that so that your betta can mark out his patch without feeling threatened by his tankmates. Ideally, you need a 30-gallon aquarium to comfortably house a school of Harlequin rasboras and a betta.

When it comes to tank shape, both species do best in a long tank, rather than a tall one. Bettas need easy access to the surface so that they can feed and breathe. Rasboras love to swim in a school in open water, and a long tank suits that behavior perfectly.

Both bettas and rasboras can jump, so a tight-fitting lid and cover slide are essential if you want to keep your fish securely in their home!

Both betta fish and rasboras originate from quiet, slow-moving waterways. So, although you should always have an efficient filtration system installed in your tank, you don’t want a very strong flow, as that would stress both species.

A dark substrate will show off the bright, vivid coloration of your betta and that of the Harlequin rasboras.

You’ll need to provide lots of lush plants around the sides of the tank to offer hiding places for the rasboras. In nature, both fish enjoy a dimly lit environment, and floating plants are also a good idea, as they will diffuse the light entering the tank, and they also provide an anchor for the betta’s bubble nests, as well as offering a refuge for any rasbora fry that may appear in the tank. Your betta will appreciate a few broad-leaved plants to rest on, too.

Bettas like to have a cave to hide away in and to claim as their territory, so remember to include at least one resin cave or hanging log in your setup. Some pieces of driftwood and rocks make good decorations, but be careful not to overcrowd the aquarium so that the rasboras’ valuable swimming space is lost. Bogwood makes a great anchor for some species of plants, and it also produces tannins that help to maintain the ideal water chemistry for both species of fish.

The addition of a few dried leaves to the aquarium can encourage microbe colonies to grow, which will provide extra food for the rasboras.

Bettas like to hang out in the upper part of the water column, occasionally gulping air from the surface. Harlequin rasboras prefer to swim in the open water of the upper to middle regions of the tank, which won’t bring them into direct conflict with your betta.

Everyone knows that the male betta has a reputation as being an aggressive character that won’t tolerate other fishes in his territory. However, each fish is an individual, and some bettas are far more laid back than others. Rasboras are peaceful fish and are generally quite timid, which is why they prefer to be kept in a large school. So, provided that your tank has lots of cover and hiding places, both species should be able to keep out of the other’s way. 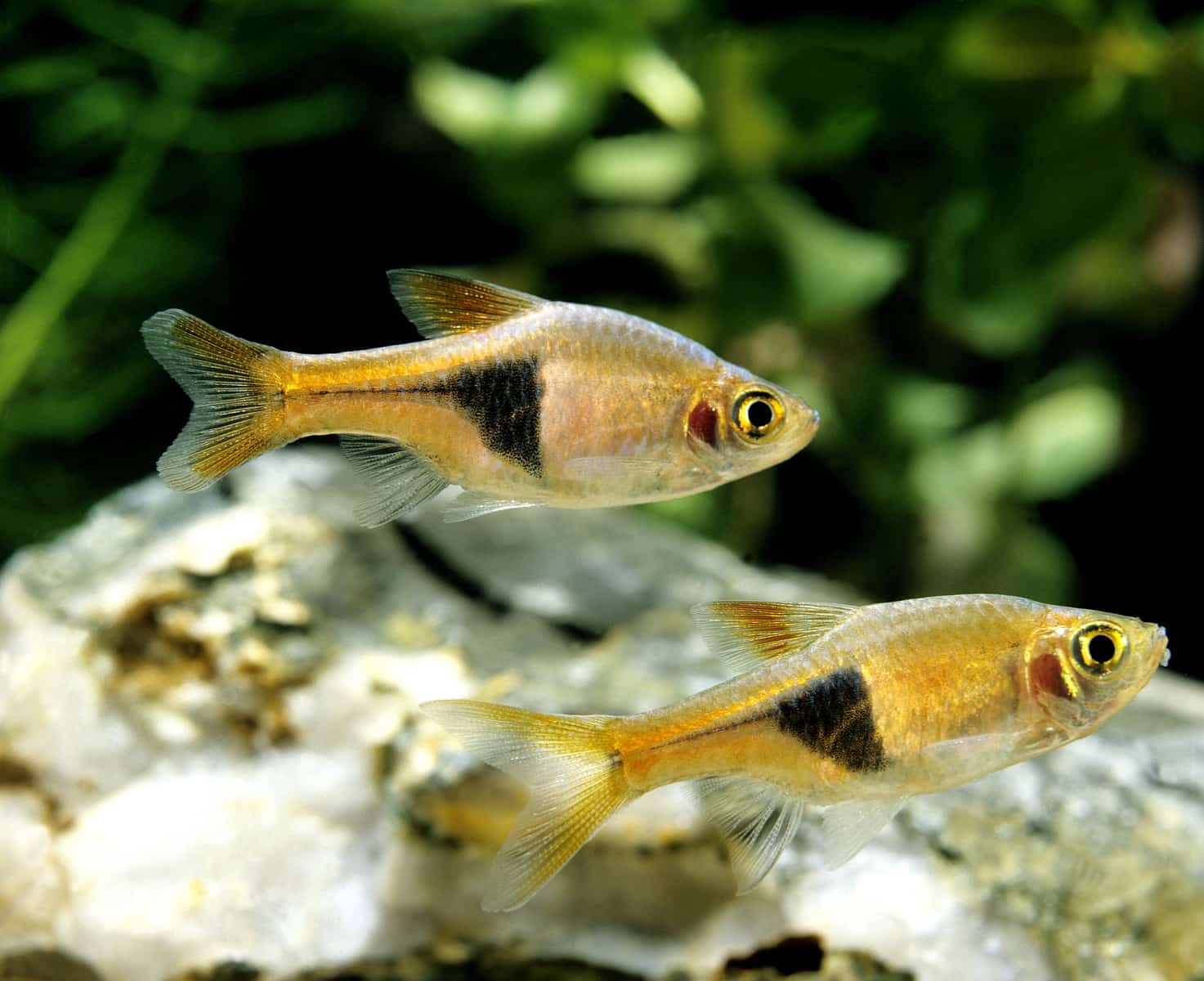 Provided that they are given the correct water parameters and a nutritious, well-balanced diet, both species are pretty disease-resistant. That said, overfeeding, dirty tank conditions, and the introduction of new fish can all introduce a range of common health conditions to the setup.

Before adding new fish to your main tank, it’s crucial that you quarantine them in a separate tank for a fortnight. Also, wash any new plants, decorations, or substrate to get rid of any bacteria that may be present before placing the items into your display aquarium.

Prevent health problems by keeping the tank clean and well-maintained, and test the water each week to make sure that your filtration system is controlling the levels of ammonia and nitrate adequately.

Harlequin rasboras can be found for sale at most good fish stores for a few dollars each, although you’re likely to get a discounted price if you buy a group of these popular fish.

On the face of it, the Harlequin rasbora can make a suitable tankmate for a lonely betta fish.

These fish are pretty easy to care for, provided that you give them an environment with lots of dense plant cover and don’t overcrowd the tank. Both species enjoy similar water conditions and share the same dietary requirements. The rasbora is a peaceful fish that won’t hassle your betta, and although very attractive and colorful, rasboras don’t have the bright coloration and floating finnage that can trigger aggression in bettas.

Overall, we think that Harlequin rasboras and betta fish should get along just fine, as long as you bear in mind the information we’ve provided for you in this guide.