You might have heard that betta fish can’t be kept with anything else, at all. While this is true for the most part, there have been some success stories with keeping bettas with small invertebrates, like dwarf crayfish. There are a few extra steps you will need to take in order for your dwarf crayfish and betta fish to live peacefully together, but regular maintenance and upkeep is easy and very rewarding!

Keep reading to find out everything you need to know about keeping dwarf crayfish with betta fish together in your freshwater aquarium!

Can dwarf crayfish live with a betta fish?

In short, possibly yes. There is a lot of discussions about which tank mates can actually go with betta fish and which can’t. Unfortunately, this is usually based on trial and error and ends up in a missing invertebrate or damaged betta. However, a considerable amount of hobbyists have had success keeping both betta and dwarf crayfish together in the same aquarium. At the end of the day, compatibility is largely decided on by the personality of the fish and the crayfish. Even if things seem to be going well for an extended period of time, there is always the possibility that one day one of them may be missing from the tank.

There are a few ways to increase the likelihood of success though, like choosing the appropriate dwarf crayfish species, setting up your tank with both species in mind, having ideal water conditions, and making adjustments at the first signs of trouble.

These are two main dwarf crayfish species you’re most likely to come across in aquarium stores that might work best for your betta tank:

These crayfish are naturally found in a very limited range in central Texas, in between the Lavaca River and the Brazos River. Not much is known about their preferred conditions, but they have been documented in warmer waters and have been known to burrow in drought conditions. They seem to prefer slow-moving and standstill shallow conditions with emergent plants where they are sheltered and can feed on detritus.

These crayfish stay incredibly tiny and usually reach their full size between 1.0-1.5 inches (2.5-3.8 cm). Their natural coloration is various tones of greys and tans, making for a camouflaged-marbled effect. While these crayfish have been observed largely as detritivores, they have been known to go after smaller invertebrates, like ghost shrimp, in the aquarium. 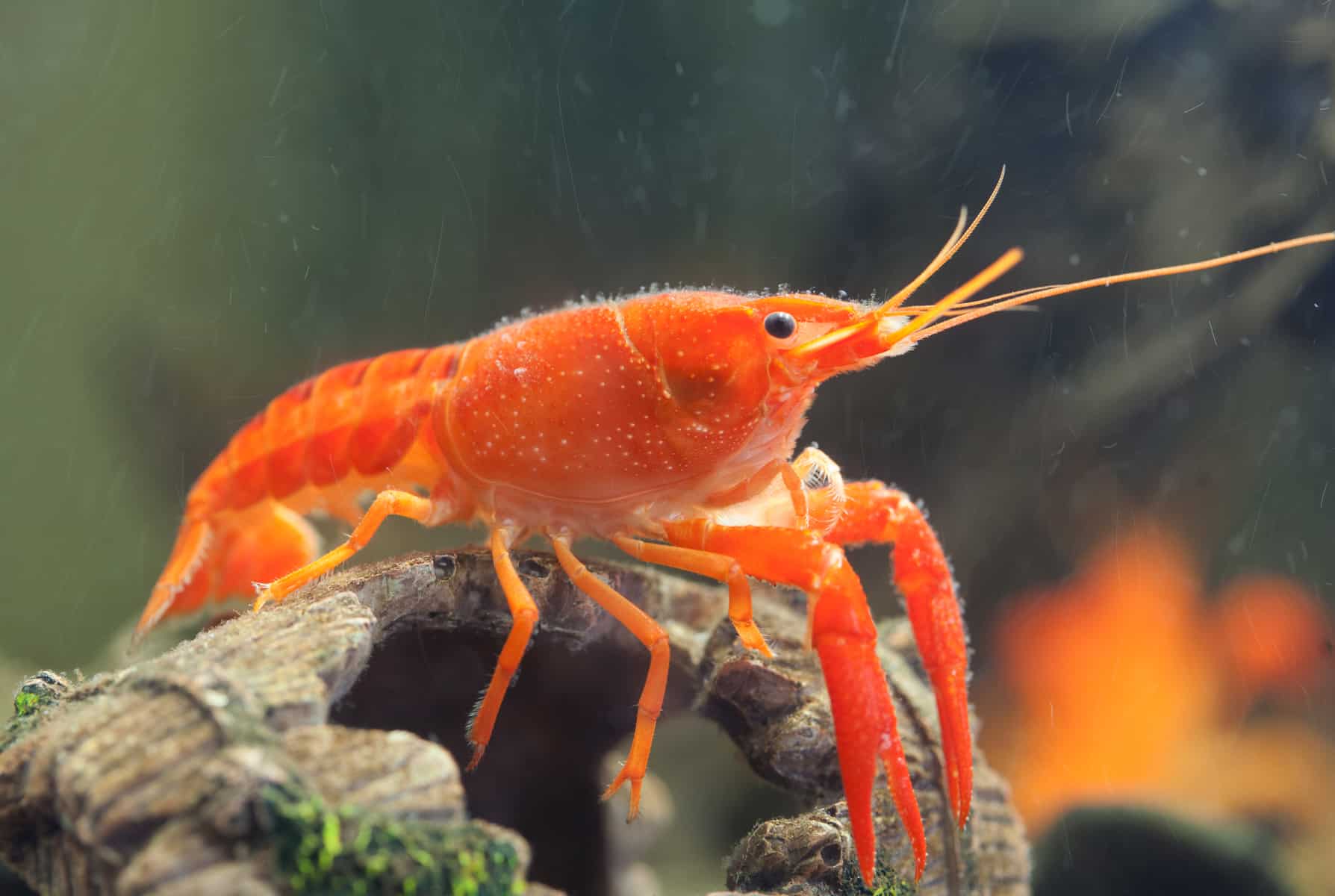 A wild type Mexican dwarf crayfish is naturally tan and brown and may grow to about 1.5 inches (3.8 cm); the aquarium hobby has since selectively bred the species to make them express a vibrant orange coloration, though their adult size remains unchanged. Little is known about their preferred environments, though the spring and lake areas they come from are at high altitudes, subject to colder temperatures, and only about 40 feet (12.2 m) deep.

As we mentioned before, keeping dwarf crayfish and betta fish together is largely about luck and the personalities of each. However, there seem to be a few tips and tricks that could satisfy the needs of both, allowing them to peacefully live together:

For one betta alone, a 5 gallon (18.9 L) aquarium is usually sufficient. However, when adding a dwarf crayfish to the tank, it is best to give as much space as you can to help prevent them from having to interact with each other too much; if they don’t see each other a lot, then there’s less of a possibility that they will injure each other! At least a 10 gallon (37.9 L) tank is recommended for only one betta fish and one dwarf crayfish; in these cases, a taller tank is better than a long tank to make a physical height difference between the two.

There should be lots of hiding places throughout the tank, in the form of caves, plant pots, and other aquarium decorations; though dwarf crayfish are naturally detritivores, they may most likely try to eat any live plants that are introduced to the tank. A small-grained, sandy substrate would be better than gravel for your crayfish as it could burrow and get injured by harder and sharper substrates.

Another trick that some hobbyists have found works for the betta fish/dwarf crayfish duo is to make sure that they are both fed well and often. This may help deter your dwarf crayfish and betta fish from taking an interest in each other, but there is never any guarantee.

If planning to keep this tank setup, it is also recommended to get short-finned betta varieties instead of long-finned ones. The major problem that happens with dwarf crays and bettas is that the crayfish goes after finnage; short fins may help keep your betta out of reach even if the crayfish has small pincers!

Make sure that the tank is tightly secured. Crayfish (and betta fish!) are escape artists and dwarf crays can fit through even smaller cracks and crevices!

Here are a few questions you should consider before going out and purchasing a betta fish and/or dwarf crayfish: 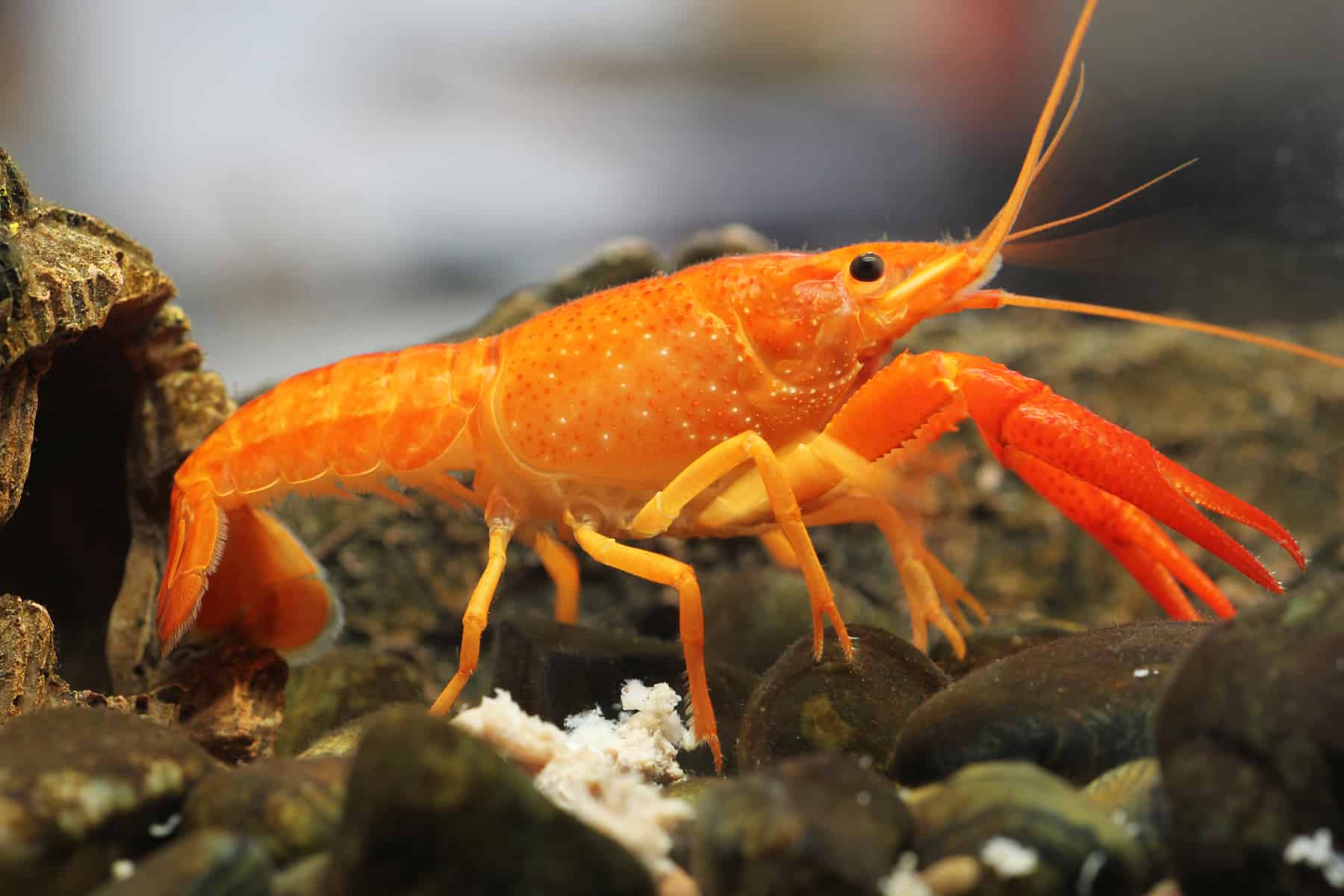 Can dwarf crayfish live with shrimp?

In order for this trio to work, all three would have to be completely unaware of each other’s presence, which is very unlikely and should not be tried.

For more information about keeping betta fish with shrimp, make sure to check out our guide here.

Can a lobster live with a betta?

By scientific categorization, a lobster belongs to the Nephropidae family. Crayfish belong to the Astacoidea and Parastacoidea superfamilies, which are related to Nephropidae but are not the same animal. Most simply, lobsters live in saltwater while crayfish live in freshwater and the two are loosely related.

This would mean that no, a saltwater lobster cannot live with a freshwater betta. This also means that any ‘freshwater lobster’ you may see advertised is actually a crayfish as well.

Make sure to always research tank mates before adding them to your tank! Also, try to get the Latin names of the livestock you are purchasing just in case you need to research more about them later on.

Keeping dwarf crayfish with betta fish can definitely be tricky and may end up in a dead fish or a dead crayfish. You should not try to keep the two together if you have not done enough research or haven’t set up the tank in the most efficient way.

Make sure to give both your betta and crayfish enough space within the tank, with a taller tank being better than a longer tank. Provide lots of hiding spots, feed often, and try to get a betta with shorter fins. Be prepared to have to rehome one of the two in case either one is especially aggressive.

If you have any questions about keeping dwarf crayfish with betta fish or have had experience with keeping the two together in the same tank, don’t hesitate to leave a comment below!