Title: Do Betta Fish Eat Other Fish & Other Fish?

Meta: Do betta fish eat each other and other Fish? This a common question that many have. We will help you understand if it is okay for your betta fish to eat other fish. Learn more today!

Yes. Betta fish are carnivores, and they are not picky eaters. When choosing what to eat, betta fish take an “if it fits, I sits” approach.

In other words, if another fish fits in a betta’s mouth, the betta will eat it.

This is true whether the fish is a smaller, less aggressive tank mate or a baby betta.

Yes. To a hungry betta, baby fish (fry) of any variety look like the perfect snack. In the wild, betta fish eat small, high-protein foods, such as plankton, crustaceans, and insect larvae.

When it comes down to it, baby fish don’t look much different than insect larvae, and a hungry betta will not discriminate.

Bettas behave similarly in tanks as they do in the wild, so if you put a baby fish in a betta tank, you should expect it to become dinner.

Do Bettas Eat Their Own Young?

Sadly, bettas will even eat their own fry, especially if they are hungry or stressed. Under perfect conditions, a male betta is a dedicated father, but they may swallow eggs or eat the baby fry in tanks.

The males may have aggressive behavior, and they may turn to carnivorous fish. However, this individual personality may vary from one adult betta fish to another.

In the wild, betta fish eat eggs that haven’t been fertilized or fry that have some kind of defect, but in captivity, your fish may become stressed or confused and eat all its babies.

For this reason, most betta keepers remove the parents after breeding and keep a separate tank just for eggs and fry. The fish fry is beautiful fish that are appealing to most fish owners.

Do Betta Hunt Other Fish in the Wild?

Betta fish don’t really hunt other fish. Rather, they rummage along ponds and streams looking for insect larvae, nibbling on plant roots, and looking for other treats.

Still, if a betta comes across a smaller fish that fits in its mouth (like fry from another species), it will not turn down a meal.

Betta fish are also territorial, so they may fight off other fish that invade their space. Always keep compatible fish in one unit to prevent the fish from fighting.

Male bettas are more prone to fighting because they always compete for mates.

Can You Put Two Betta Fish in Together?

Absolutely not. Two betta fish will immediately begin fighting for food and space unless they intend to mate. Sometimes, females can get along, but two males will always fight over territory, resources, and mates.

Putting two betta fish in one tank will only lead to disaster. The fish will fight, and one fish may even kill the other.

The number of fish per tank depends on the fish species. For instance, peaceful fish species may coexist with other fish, unlike the angry betta.

Adequate knowledge about betta is crucial in the pet fish trade.

Read our blog, “How Do Betta Fish Fight: Top Signs Of Aggression,” to learn more about why you cannot put two betta fish together outside breeding time.

If a betta fish encounters a dead fish in the wild, it will pick at the corpse and eat scraps. Like we said, bettas are not picky eaters.

In short, betta definitely eats dead fish, and if there’s a dead fish at the bottom of your tank, your betta will likely try to eat it. You should consider giving your betta meat from time to time. 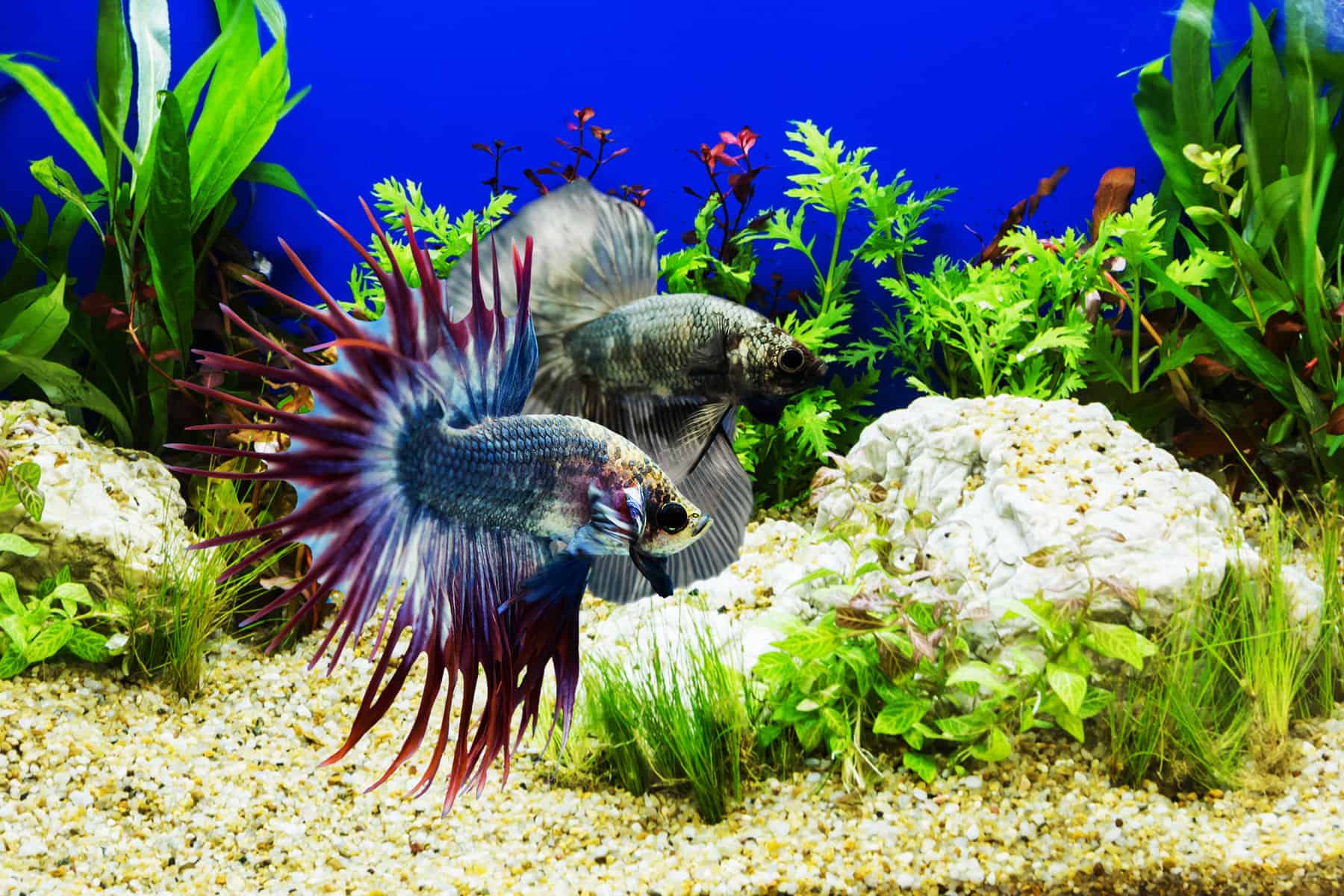 Betta fish will even eat each other if one betta fish dies.

As such, you need to be extremely careful which tank mates you choose for your betta fish. Otherwise, you could find your betta snacking on its “friend.”

The safest option is always to house your betta by itself.

You may have heard that ghost shrimp make ideal betta fish tank mates, but I am sad to tell you that my betta once killed and ate a ghost shrimp.

Betta fish eat crustaceans in the wild, so shrimp is a natural treat for them. While some bettas can get along with ghost shrimp, others will eat any crustacean in their path.

To mimic your betta fish’s natural diet, you can feed them daphnia and brine shrimp.

In summary: if you put shrimp in your betta’s tank, you can all but expect it to become food. It turns into their carnivorous diet. Hungry betta fish can turn into a menace in your tank.

Hiding spots are crucial in a tank if you consider having different species of aquarium fish.

Whether your betta gets aggressive, kills any perceived threat to its territory, and eats the scraps — or it suddenly feels like a late-night crustacean snack — your shrimp is likely doomed.

Some betta fish will tolerate a ghost shrimp as a tank mate, but there’s no guarantee the shrimp will not be eaten because the fact is that betta fish eat shrimp.

In Summary, Betta Fish Should Be Kept Alone

Betta fish will eat anything they get the opportunity to eat, including each other, other fish, baby fish, and any creature killed while a betta is protecting its territory.

Although some bettas have personalities gentle enough to handle tank mates, not all betta fish will leave their tank mates alone.

If you don’t want to accidentally cause a betta fight (illegal in most countries) or give your betta fish a snack, keep it solo.

We promise your betta buddy won’t get lonely.

(If you believe your betta is a friendly fish, and you are committed to getting a tank mate, at least read our blog, “Tankmates for Betta: A Best to Worst Guide.”)