Not only have betta fish been bred for their beautiful colors, but hobbyists have also tried to achieve the most elegant and flowing fins and tails possible. As a result, the hobby has many different tail types that all have their signature look.

Some tail types are easier to find than others and some can even be bad for the overall health of your fish. Knowing your betta’s tail type can give more insight into the genetics and care needed for your fish.

Keep reading to find out everything you need to know about tail types and how to tell the difference between them!

The domesticated betta fish is scientifically known as Betta splendens. These fish are native to the shallow waters of Thailand, Vietnam, Cambodia, Laos, Malaysia, and Indonesia.

These fish grow to be about 3 inches (7.6 cm) and are known for their bright colors and flowing fins.

In the wild, bettas are carnivores and feed primarily on insects, different types of larvae, and other small crustaceans. In the aquarium, they need to be given a similar diet in order to maintain their vibrancy and personality.

These fish do best in a 5 gallon (18.9 L) tank or more, with live plants and a fine-grained gravel or sand substrate. They will appreciate live plants or other safe artificial decorations that they can rest on and create bubble nests under.

Betta fish do have labyrinth organs, or a lung-like organ that allows them to breathe atmospheric air, and need to have constant access to the surface of the water. If you notice that your fish is frequently gasping for air at the surface, then check water parameters for ammonia and nitrite.

Otherwise, Betta splendens are some of the most beautiful and boisterous fish available in the aquarium hobby. Given the right care, they will quickly fill up and bring life to any fish tank setup.

What are tail types?

Betta fish are largely named after the size and shape of their tail.

Most varieties of betta fish have been bred to exhibit similar colorations over tail types, so naming by color can be difficult if it’s not a designer breed. An exception to this would be something like the dragon scale betta.

Betta fish genetics are complex, though, and the science behind the tail is truly fascinating!

Why are there so many different types of betta fish?

The answer to this is simple, yet complex.

Betta fish are prized for their beauty and breeders want to see how far they can push the natural genetics of this species; it should be noted that some varieties of betta are the result of natural mutations, but most of the fish we see have been selectively bred!

If you’re interested in knowing how these genes interact with each other and create the shapes and color patterns you see on your fish, make sure to check out our basics to betta fish color genes guide.

Most wild betta species have short fins. This is most likely because shorter fins are easier to manage and care for while still being attractive enough to find a mate.

Over centuries, these fish have been bred to have longer fins, brighter colors, and heightened aggression for commercial fighting.

Plakat is usually interchanged with short-finned to describe tail length and shape. These fish have minimal finnage that is usually rounded.

The term Plakat comes from the Thai word ‘Plakad’ which means fighting fish. Plakad can be wild-caught fish or bred in captivity, but they originated in the rice patties throughout Southeast Asia, specifically in Thailand.

Because these fish were bred for fighting, they have strong bodies, jaws, and small fins for quick mobility. A fighter with smaller fins will also suffer less damage when paired with another male to fight. 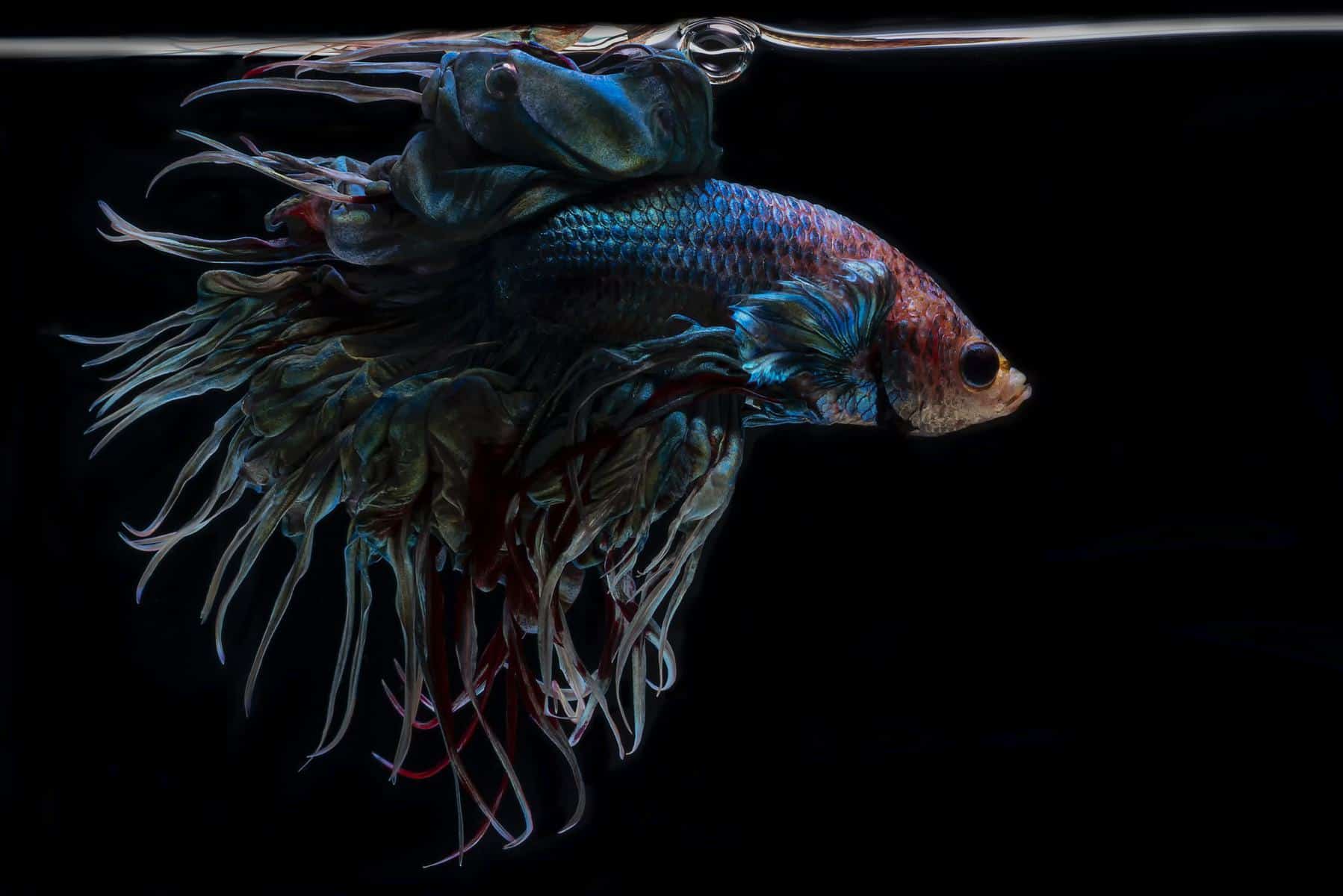 Crowntail betta fish are very common to come across in local pet stores and are popular due to their spiky appearance. Both males and females come in most colors, though red and blue are most prominent; females are usually lighter in color and have shorter fins.

Crowntails are typically long-finned bettas, though some breeders are attempting to make a short-finned variety where the webbing on the fins is reduced.

These fish have long, skinny rays that make the fins look like the top of a crown–hence, the name. However, if the webbing of the fin surpasses 2/3 of the rays, then this is actually another type of betta called the Combtail betta.

Sadly, both of these fish are prone to their rays curling in response to poor water conditions.

Combtail bettas are very similar in appearance to Crowntails and it can be difficult to tell the difference at first. They are a newer addition to the hobby and genetics are still being worked out for consistency.

The key to identifying them is by looking at the amount of webbing there is in regards to the rays. If it looks like the rays are more than half covered by webbing, you’re probably looking at a Combtail instead of a Crowntail.

These fish don’t seem to be as susceptible to curling as Crowntails are, but they still need good water quality. 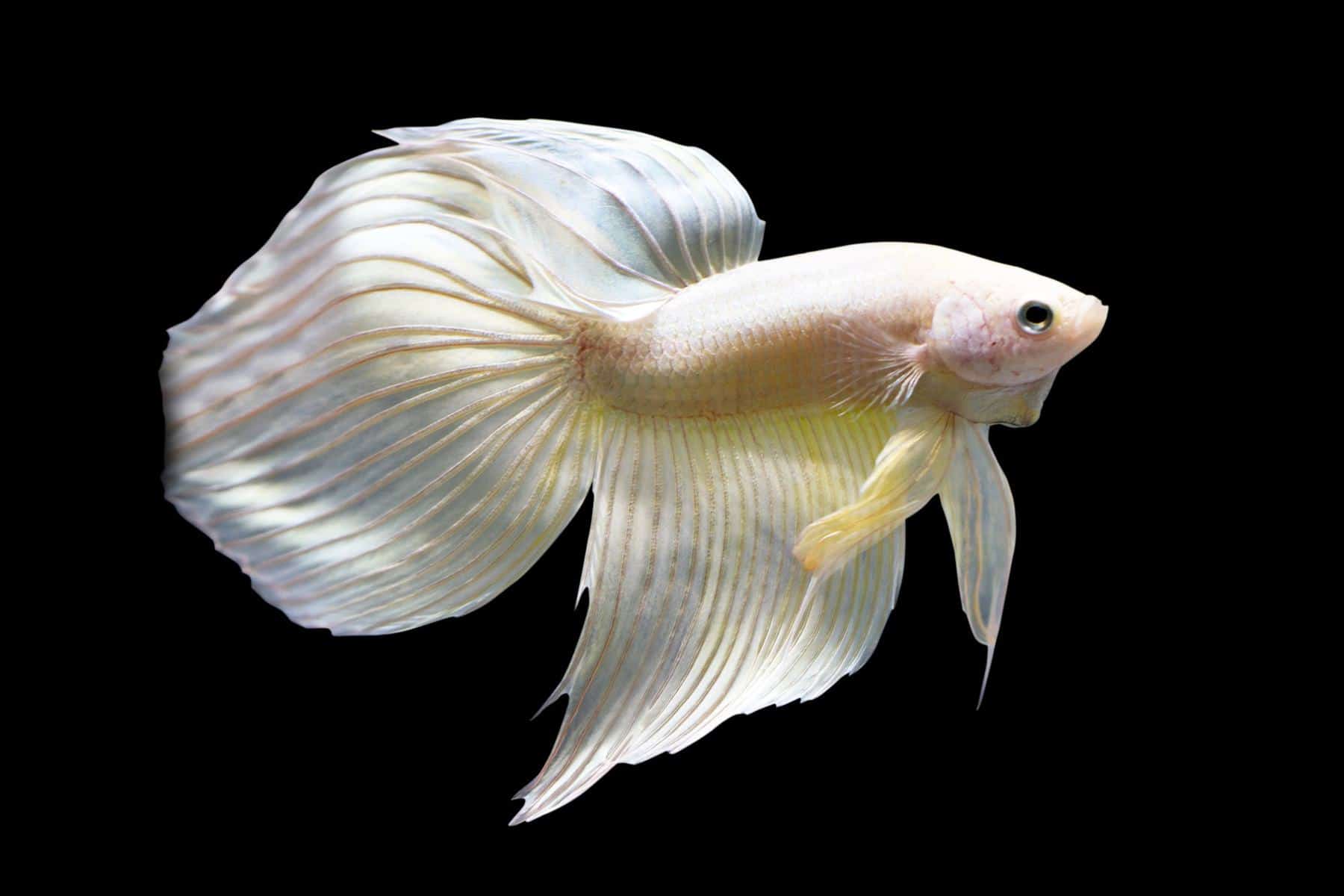 Veiltail betta fish are the poster tail type for the species.

These fish come in all colors and are easily recognized by their downward-sloping fins that come to a point. The fins are long and flowing and the tail arches up and over like a veil.

Though this is probably the most popular aquarium fish of all time, this tail type is not a showable fish in IBC competitions. It should also be noted that this tail type is genetically dominant over others, which makes breeding Veiltails very easy comparatively. 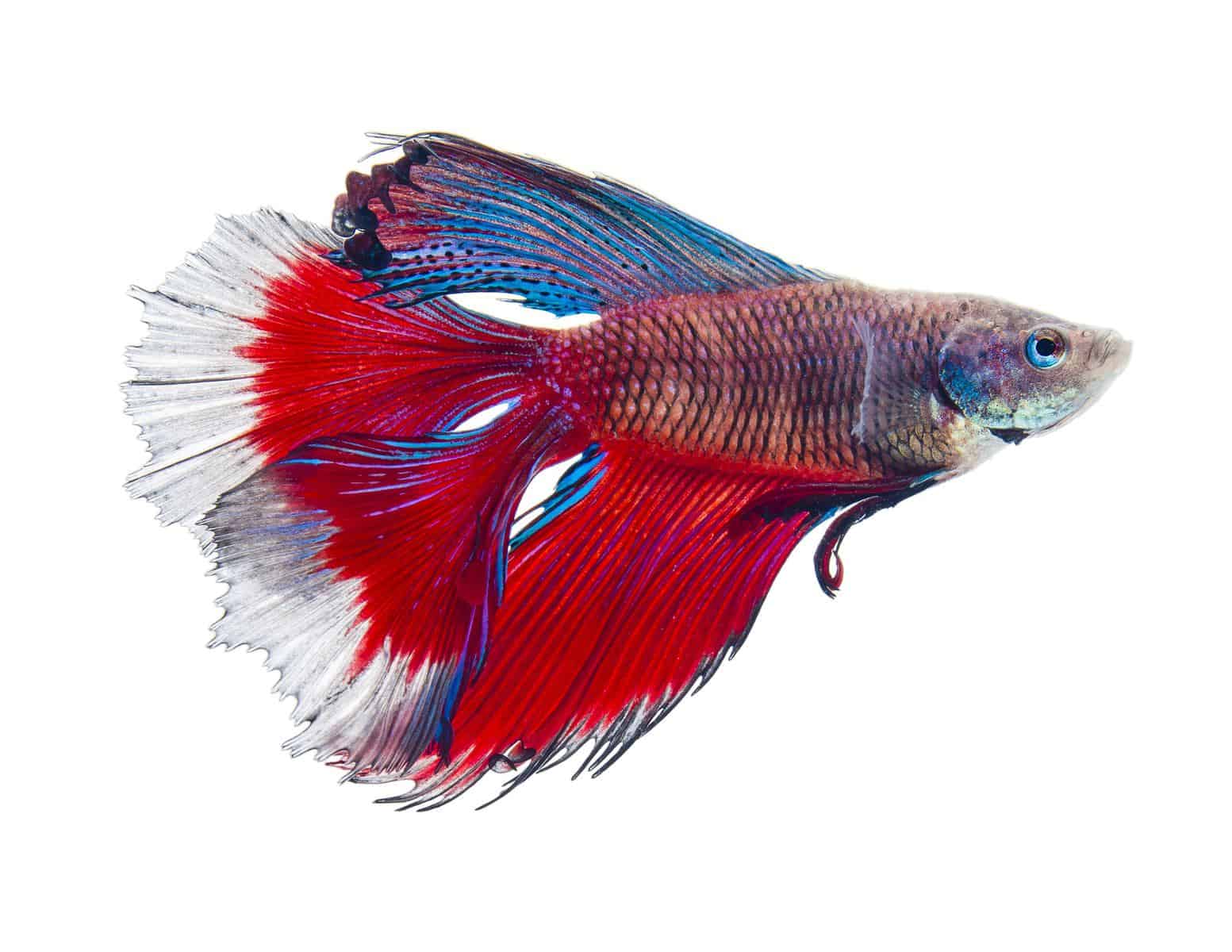 Doubletails can be difficult to find if you’re on the search for one. These fish are very unique and have two separate tail lobes which give rise to two flowing fins that are ideally, completely symmetrical.

While not very popular, this tail type has been extended to almost all other betta varieties. This means that you could possibly breed or find a Doubletail Veiltail, Doubletail Plakat, and so on.

Any tail spread that does not reach the full 180 degrees is referred to as a Delta, which we will discuss later.

Ideally, the Halfmoon tail should look like a large capital “D”, or half of the moon or circle when fully extended.

Delta tail types are similar to Halfmoons, but do not reach the full 180-degree spread.

Instead, these fish have triangular tails where they are narrow towards the base and then expand as you get farther away from the body. Tails usually spread 120-degrees.

Super Delta tails are between Halfmoon and Delta types and usually have a spread between 120- to 160- degrees.

These fins are different in shape from the traditional Veiltail as they do not have an arch and droop. Instead, these tails are still branched and shaped like the Halfmoon, they just fall short of the branching needed to make that 180-degree spread.

Over-Halfmoons have a vague description, which can make identifying them pretty hard without getting exact measurements of their tails.

These fish have a tail that is over 180-degrees when fully spread. 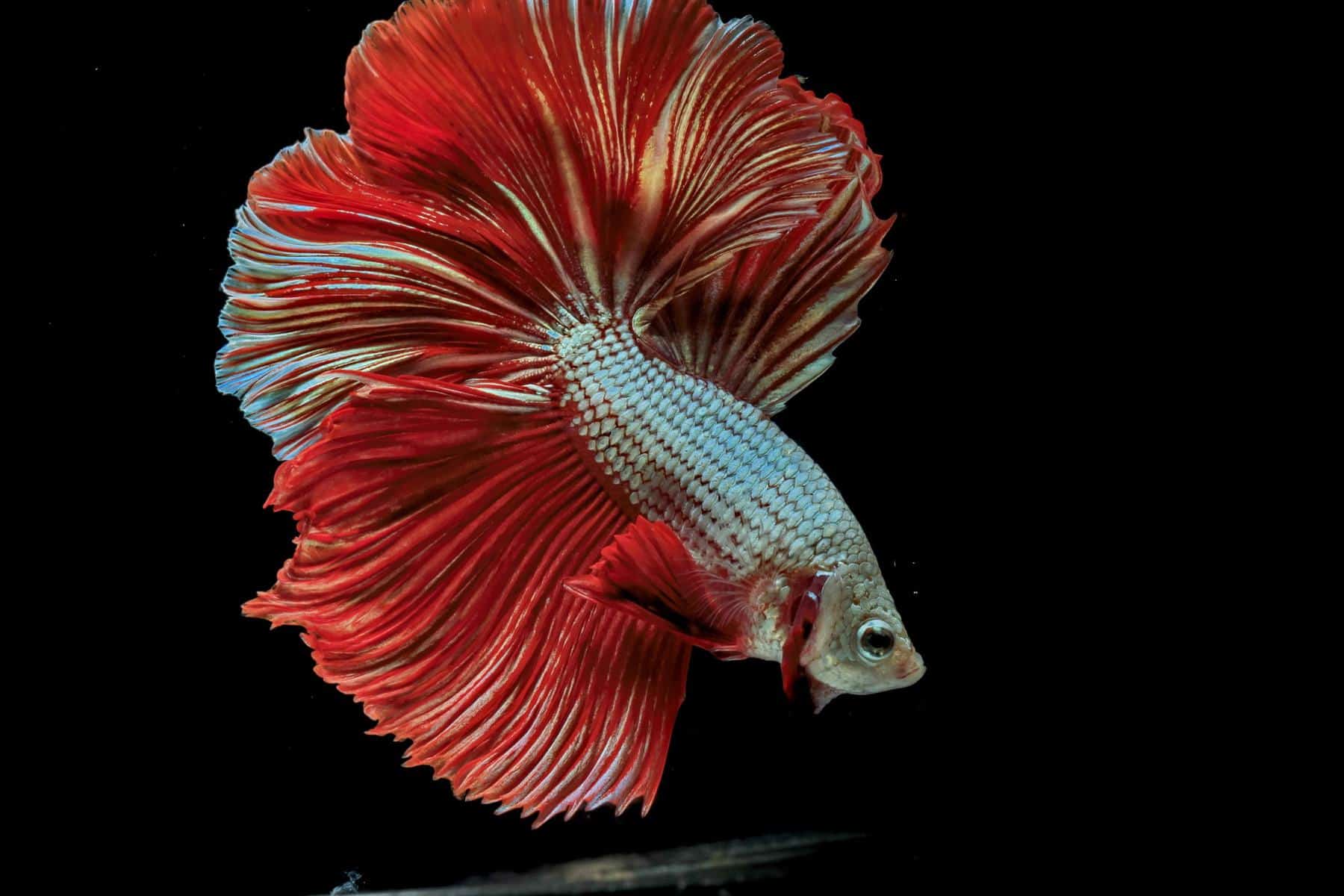 The Rosetail betta has excessive finnage. Because of this, they get easily tired when swimming and should only be kept by hobbyists who have a tank set up around this breed.

The Rosetail is a variation of the Halfmoon, with excessive branching and ruffling that gives them a floral appearance.

While a recent addition to the hobby, they come in most colors. Again, the females have much shorter tails, but can still longer than some short-finned varieties.

The Feathertail is a more extreme Rosetail with even more branching and an even more ruffled appearance.

Dumbo/Elephant Ear betta fish aren’t a tail type, but they make this list because of their enlarged pectoral fins, or the set of fins that can be found near the gills.

These fish get their name after these fins, which can resemble elephant’s ears when viewed from the front.

Like other extreme fin types, these betta fish need some consideration when setting up a tank. It’s also best to go with a Dumbo that has a smaller tail fin so that the fish isn’t weighed down too much by the excessive finnage.

Other types of bettas

New betta fish tail shapes and colors are being bred every day to push the limit of what can be done. As a result, there are many niches of designer tails and ones that don’t seem to fit into just one category.

Some of these are:

Which betta has the biggest tail?

It is largely agreed that Rosetail betta fish have the longest tails, with Feathertails being a close second. This is why most hobbyists shy away from keeping them and why it’s recommended to have a tank setup specifically with them in mind.

If planning on keeping a Rosetail betta fish, the tank should have minimal water flow to make swimming the easiest that it can be for your fish.

The substrate should be smooth to prevent dragging and subsequent fin rot. Aquarium decorations should be natural and safe for resting when needed.

While this type of betta has a beautiful tail, its beauty comes at a cost to its maneuverability and overall elegance.

Why don’t wild betta fish have these traits?

Some wild betta fish do have showstopping colors and finnage, but most have duller colors like greys and browns.

These fish have been bred for their shape, color, and aggression over hundreds of years through the process of selective breeding.

The wild Siamese fighting fish was originally adorned in Thailand (formerly Siam) nearly 200 years ago. They were then challenged against each other in aggressive competition but were eventually loved for their beauty by scientists and the aquarium hobby.

With so many types of bettas to choose from, which is the best in terms of appearance and behavior?

The short answer is all of them. It doesn’t matter if you have the rarest color or longest fins, a betta fish kept in the right tank that accents their beauty will always be breathtaking; even betta varieties with weighty tails can effortlessly flow given the right conditions.

While every fish has its own beauty, there are a few popular choices from betta keepers.

In general, hobbyists favor Halfmoons, Crowntails, and Plakats. Halfmoon betta types embrace the best flowing traits of selective breeding without being too over the top while Crowntail bettas have interest and contour.

There is a section of the aquarium hobby that favors the more natural, wild type of betta, the Plakat betta. Some hobbyists even keep other species from the Betta genus, like Betta imbellis and Betta mahachaiensis.

There are many different tail types that can be seen across colors. While one might seem to be more beautiful than the next, your betta fish will shine just as much given the right tank setup and water conditions.

Though it’s not necessary to know the exact tail type that your fish has, if you have a long-finned variety, it might be worth knowing how to properly care for your betta before it damages its fins.

If you have any questions about betta tail varieties, the many different colors that bettas can come in, or have had experience keeping a rare fin type of your own, don’t hesitate to leave a comment below!